How much useless stuff do we do as mothers? I mean, every week, I iron my son’s judo jacket. Have you ever tried to iron one of those? They are hard, and thick and knobbly. Within seconds of putting it on, my son is rolling around on the floor. Really, it’s a waste of time. I know it is. And yet I still do it.

One of my friends decided to go back to work when her youngest child became a teenager. After the first week at work (part-time, mind you), she came into my kitchen and wailed, ‘I used to bake for them, so they’d have something nice when they came home from school, and now all I can do is leave out chocolate digestives on a plate!’ After pausing briefly to blow her nose in the curtains, she left, and I spent a long time with that remark fluttering about in the back of my mind. It seemed so silly, on the face of it, to wail about biscuits, but I think that there are a lot of women (well, maybe most of us, actually) who have a secret ideal of what it is to be the perfect mother, and who are constantly beating themselves up because they never reach it.

It seems the harder women work, the more guilty they feel about their children. The less time they have, the more effort they make.

Then I read the post How to be a Perfect Father by pieterk515 who talks about how he copes as a dad when his wife is away. His secret of success is pizza. You can cook it in 12 minutes, kids love it, and as Pieter says, you can put it in their lunchboxes the next day, and everybody is happy. Well, we mums know all about pizza, too, obviously, it’s just that, somewhere in our subconsciousnesses there is the feeling that giving your kids such an easy option is, well, copping out. If it’s easy, it can’t be right. Or healthy. It’ll give them heart disease, or attention deficit disorder or irritable bowel syndrome and it will all be Our Fault. 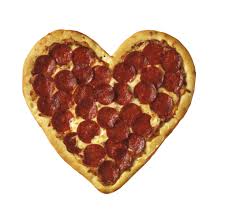 The funny thing is, that Pieter can’t see why we should feel guilty. After all, job done, everybody’s happy. But another person who posted on Pieter’s page, linbritt, put it really well when she said pizza is a

‘Life saver but guilt-inducer!! Unless it’s topped with copious amounts of veggies and then it’s not fun anymore’.

And do we ever feel guilty for being right but no fun? I don’t know. There’s just so many things we beat ourselves up about. Some of us can even feel bad for going to the trouble of leaving out a plate of biscuits because,really, we feel we should have been there in person.

So for my chocolate biscuit friend, and all the other mothers out there, who do such seemingly daft stuff as worrying about biscuits, ironing judo kits, cutting sandwiches into certain shapes, buying one kind of crisps and not the other, and talking ourselves hoarse with reminders about homework, bedtimes and teeth-cleaning, here is a rather soppy but comforting link from linn’s page:

I started blogging because I'm a writer, and I thought I ought to. Now I realise that I blog because I lwant to; even when I can't think of much to say. I do a lot of work for local businesses - get in touch if you like my style.
View all posts by elainecanham »
« Sunshine award
No singing please, this is a cinema »

5 thoughts on “Mothers, pizza and guilt”