I don’t know why writing Christmas cards makes me feel so gloomily apprehensive. I mean, it’s a simple task, isn’t it? You have a list of people, a box of cards, hopefully a working pen, and off you go. An hour later, maybe an hour and a half, tops, and you’re down at the post office buying stamps on an industrial scale (the price of which can be a bit of a jaw-dropper, I admit) but your faraway relatives are worth it, aren’t they? And then it’s all over and you can go home for a cup of tea and a Viennese fancy.

Only it never works like that. Not for me, anyway. Ok, so I have the list. I made it seven years ago, so that I didn’t have to spend ages going through my address book and separating card people from non card people. Do you send a card to that guy you used to work with, even though you haven’t seen him for three years? And if you do send it, do you put your surname in brackets afterwards, just in case he wonders who on earth you are? At what point do card people become non card ones?

The list worked brilliantly. For a while. I made it by collecting all the cards people had sent us one Christmas and compiling their names. This would solve the problem, I felt. And the next year, it did. Except that I hadn’t got the addresses for all of them. So I spent half my time writing cards, and a frazzling hour with my mother going through her address book (which she bought in 1972) and saying every page or so, ‘Oh, but he’s dead,’ or ‘Och, him. He became a nipple tassle salesman in Dumfries’, or ‘Did you mean Auntie Maggie with the camel fetish, or Auntie Maggie who went to live in Vancouver?’

Of course, as time has gone on, my list has gone the way of my mother’s address book. People have dropped off it. And new people have to be put on it. But their names are all in odd little places, and I haven’t been as efficient as I should have been, and oh hell, I know I put Jimmy and Miranda’s address down somewhere…

And then, even when you’ve written all your cards, you have (if don’t want to mortgage your children) to divide them into airmail, Royal Mail, scout post, and delivering by hand. First two; fine. Except that they entail going to the post office (and although I love my village post office, there is always somebody in front of me who wants to ask about the different ways of sending parcels of jam to Ormskirk, or Boggle Hole or Kirby Muxloe). And believe me, the Royal Mail have more ways of sending things than are dreamt of in your philsophy; First Class, Second Class, Sameday, Special Delivery – and is it a large letter or a small parcel with a wide option, (or even a deep option). Or just a medium parcel. And do you want a side order of chips with that? Oh, sorry, where was I? 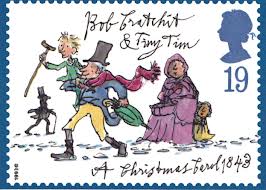 With Scout post, you have to get to Oxfam or Sainsbury by a certain date, entrust your cards to a pair of earnest boys in woggles, and hope that all your addresses are within their remit. If not, back to the post office. Delivering by hand; that should give you a nice warm feeling, shouldn’t it? Festive trudging through the village, trees twinkling in the windows, church bells ringing, but no, because, obviously you’ve left it until Christmas Eve, there are a million and one things to do at home, and why didn’t you just shove the lot through the post? Why not indeed?

One year I decided not to bother. Nobody would notice, I thought. And, it would be one less thing to worry about. But as the days went along, and more and more cards arrived I began to feel more and more uncomfortable. People had made the effort to tell me they were thinking of me (even if it was only for a moment), and I hadn’t returned the favour. Even though I was thinking of them. And even with all the bother, I missed it. I missed having my mother tutting at me for leaving everything to the last moment (well, maybe not so much the tutting), and I missed making people feel I’d made an effort.

So, now I always send cards. I send them late (occasionally) I put the wrong address on them (blame my mother). Sometimes I get the names wrong (I’m thinking of the card I sent to a guy I used to work with – I got his wife’s name completely wrong. So wrong in fact, she accused him of having an affair. They’re divorced now.)

I started blogging because I'm a writer, and I thought I ought to. Now I realise that I blog because I lwant to; even when I can't think of much to say. I do a lot of work for local businesses - get in touch if you like my style.
View all posts by elainecanham »
« Okay, so now I get the point
Where’s the white stuff? »