Don’t ever put up, or shut up, girls

Once upon a time I worked on the sports desk of an evening paper.  One day, at lunchtime, I was going over some page proofs when the phone rang.

Some guy on the end said, ‘Can I speak to the sports editor?’

‘I don’t think so. Is the deputy editor in?’

‘Is Reg in?’ (Reg was our racing correspondent)

‘I shouldn’t think so, love. You’re just the secretary aren’t you? I need to know the date of the FA cup final.’

I’d forgotten all about that until I watched Mary Beard’s BBC4  lecture ‘Oh Do Shut Up Dear’,  on the silencing of women. I was appalled when she told of the insults (some of them death threats)  that she regularly gets whenever she appears on BBC’s Question Time. Somebody actually told her he’d chop her head off and rape it. Most of the hate mail she gets tells her that she’s stupid. Eh? She is Professor of Classics at the University of Cambridge, a fellow of Newnham College, and Royal Academy of Arts professor of ancient literature. If that’s stupid what does that make the rest of us?

If you’re going to put somebody down effectively, you need to use wit. You have to match your intellect to your intended victim and expose their weaknesses.  Trouble is, most of these people aren’t too hot on the intellect front, and all they want to indulge in is some anonymous, venomous bile spilling.

Professor Beard’s lecture was about how we have been conditioned over the last 3,000 years, since Homer’s time, to believe that it is wrong for women to take part in politics, to speak publicly,or  to have an opinion on issues other than the home and family. She points out that women in politics these days are tolerated if they have jobs in education or health, but that there has never been a female Chancellor of the Exchequer.

I found her speech riveting, but she fudged it at the end, when it came to how we, as women, should deal with men who talk over us, or who ignore us at meetings, or who tell us to shut up, (as revealed by a distinguished panellist at January’s World Economic Forum). Professor Beard is a reasonable, decent woman and an academic, so her solution was along the lines of analysing and then dealing with the faults  causing these problems.

That’s all very well, but it doesn’t cut the mustard in the here and now.  We can’t, like Kruschev, take our shoes off and bang them on the table if we are ignored. (Although, actually the idea does rather appeal) because then we play into the stereotype of being emotional and unreasonable. We cannot put up and shut up, so we must just be assertive, and keep going.

And, if the insults get too many, we can always quote Winston Churchill, who on being disturbed in his toilet by a call from the Lord Privy Seal said, ‘Tell him I can only deal with one shit at a time.’

My beloved speaks and says to me:
“Arise, my love, my beautiful one,
and come away,
for behold, the winter is past;
the rain is over and gone.
The flowers appear in the garden centre,
the time of messing about in the potting shed has come,
and the voice of the lawn mower
is heard in our land.

Smashing my auntie to a jelly

Remember my mother? (94, excellent mechanic, plays Scrabble,  makes pie).  ­She bought an iPad shortly after Christmas. Not because she’s into tekkie stuff, but because Auntie Barbara has one. Auntie Barbara (who makes the best mince and tatties ever) is a mere a child of 84 and is constantly using her tablet to converse with her daughter-in-law in Inverness, and challenging all comers to Word On, which I suppose is a bitly version of Scrabble.

However, both she and my mother are now addicted to Candy Crush, and their weekly Saturday catch-ups, instead of being devoted to the latest Magiwool knitting patterns for evening wear, are now delicate fencing matches of who is on what level. And how long it took them to get there.

On Sunday mum came to lunch. She came in, gave me the pudding she’d made (delicious, natch) engaged her grandson in some query about missing jpegs, and then sat down and played Candy Crush constantly until dinner was ready. Her grandchildren were equally absorbed in their phones. It was eerily quiet. No conversation about how tidy their bedrooms were; nothing.

It was not until Tuesday that I realised what was going on. Tuesdays, you see, are when I go round and play Scrabble with her. This Tuesday, I played Scrabble, she played Candy Crush (and Scrabble). It was like being with a self-absorbed teenager. Somewhat exasperated, I at last said to her, ‘So what level are you on?’

‘And what level is Auntie Barbara on?’ I asked.

‘27,’ she said (rather muffled, as she was concentrating on her moves) ‘But she can’t get off it. She’s having a bit of difficulty.’

She looked up and I could see the gleam in her eye. It was obvious what she was thinking: Within a week, I’ll be ahead of Barbara, and where will her mince and tatties get her then?

So there you have it. When you get to 94, there is still good food, new stuff to learn, and, oh yes, obsessive family rivalry.

Must stop, have got to smash my jellies.

I want to admit to something laughable – one of my favourite films is The Sound of Music. Possibly because I had one of the best nights out ever when I went to the Singalonga version at the Prince Charles Theatre in London, and possibly because of the bit where the Reverend Mother calls Maria a c**t  face. 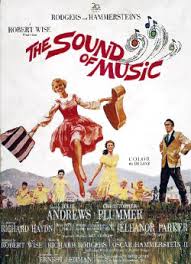 I mean, what’s not to like? It has brilliant songs, great scenery and old sexy boots himself, Christopher Plummer. It’s true that we do have to put up with Maria weaseling the lovely baroness out of his affections, but I have always thought there was plenty of space on their long walk to Switzerland for him to push her off the Matterhorn without anybody noticing (or caring) much.

In fact, what a great sequel that would be. We could start with an aerial shot of her tumbling down the Reichenbach Falls (wrong movie, ed) and giving one last plaintive yodel before cutting to the children finding hidden Nazi gold, and outwitting Ernst Stavro Blofeld in his cliff top hideout.

Where was I? Oh, the singalonga version. If you haven’t been to one, you must go. The night I went there was a chap in the aisle cradling a five-month old baby, an entire row of drunken Aussies behind us, and some random bloke dressed as a brown paper parcel wrapped up with string. Where else could you put all that lot in complete harmony? Although harmony is possibly not the right word considering our poor efforts in the nuns’ latin plainsong.

Those Aussies should really make themselves available for every performance. When Maria sat down in the meadow with her guitar, one of them yelled, ‘Stairway, Maria, give them Stairway!’ When Max bundled the kids into his car, another shouted in deep dismay, ‘Oh, no! Don’t leave the children with Uncle Max!’

But it was the bit where Maria goes back to the abbey that caused the most hilarity. Somebody sitting next to me said, ‘Oh my God, this is the bit where Reverend Mother swears at Maria.’ And sure enough, in the next few seconds we had Peggy Mount intoning gloomily, ‘What is it Maria? What is it you can’t face?’

I was so inspired that, a few weeks after this, I went to see Singalonga Wizard of Oz. But it wasn’t the same at all, because the Wizard of Oz is such a good, well made film that you simply can’t take the mick out of it in the same way. To work, it really has to be a bad film, with good songs that everybody knows.  Hmm… I’m just off to book tickets for Singalonga Mamma Mia. In Australia.

Today I got up at 7am, woke my son, made him breakfast, packed his lunch and waved him off to school. At 8am I woke up, and realised that I had just dreamed it all.

When nothing goes to plan 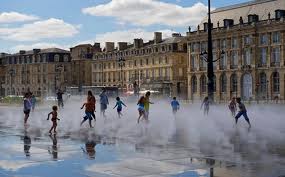 My last post, about three million years ago, it seems now, was about creating characters. So what did I do after I wrote it? I decided to enter a short story competition. Nothing bad about that, except for the fact I took all the earnest advice, I had just handed out, far too seriously, about planning and plotting and making sure everything was right before getting to grips with the story. Bad idea.

I was inspired, you see, by a photograph. Nothing wrong about that, although it was of me on holiday in Bordeaux, which seems a bit self absorbed. But I just thought how cool it would be to write a story about a woman who wants to treat her mother to a weekend in Bordeaux, only to realise that her mother knows the city really well, on account of a broken love affair long ago (get your hankies out now).

I decided to up the tension by putting the affair against the backdrop of the invasion of France in WW2. Which was where it all began to unravel. Because, if I made it a modern day story, then the mother couldn’t really be much younger than 90, and probably wouldn’t be up to trailing round Bordeaux and bumping into old acquaintances in the maquis (unless they were literally skeletons in her cupboards). And, when I started researching the history of the time I got in a right tangle. It was almost impossible to give my characters factual backgrounds without wondering if I was saying something completely wrong. All my inspiration was strangled and died. (Hankies, don’t forget the hankies).

My problem was that I let the research take over. If I’d done a bit of free-writing, say, I might have found a way round the problem. (Maybe by making the daughter tell the story to her daughter, and maybe setting it in a city whose past is slightly easier to be confident about. Maybe.).

But there you go. After writing and writing and re writing and reading more than I actually wanted to about the history of Bordeaux, and getting far too close to the competition deadline without achieving anything concrete, I screwed the whole lot up and sent in a story I wrote two years ago. Then I went to Ikea. Not exactly what Brendan Behan would have done, but then, despite my artistic tendencies, I am a middle aged woman who has cutlery needs.

Live and learn. In writing follow your instinct, not the rules.  And when in doubt, keep blogging. It’s nice to be back.