How shameful is this?

Remember I told you about my grandad, the one who went to New York and fell off the Mauretania? Now I want to tell you what happened to him when he joined the army in 1914. Partly because it’s interesting, and partly because there is no memorial to the regiment that he served with; which when you think of what they went through, is nothing short of shameful.

James had four brothers and two sisters. His brothers Bob, Alexander (Sandy) and Arthur all signed up. I’m not sure what the youngest son George did, but their parents must have found life hard with four sons on the Western Front. Bob was 30 and married. His wife Peg gave birth to their third child in November 1914, and he joined the Scots Guards in January 1915. At first everything went pretty well, the army kept him in England and trained him to shoe horses. But in 1917 he was posted to the Somme and in March 1918, when the Germans mounted a counter attack he was shot in the shoulder and died the next day. Here is the list of personal effects that were sent back to Peg, on August 3, 1918: photographs, cards, a poem, two discs, letters, religious book, a handkerchief, 11 buttons, a purse, scissors, a French dictionary, two badges, a wallet and a broken brooch. 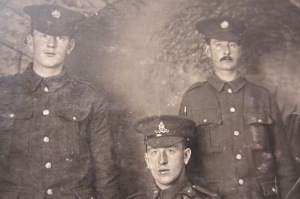 Sandy, two years younger, was a driver in the Royal Artillery. This meant riding a horse in a team of six pulling a gun carriage, and making sure that they got to the front line without stampeding or turning the gun over. Bit like his farm job, I suppose, except that nobody shoots at you in Fife. Amazingly, he survived and went to Canada, where he had a rather extraordinary and ultimately tragic end (but more about that another time). Arthur was 21. He too was in the Scots Guards, and was shot in the knee and invalided out.

And now we come to James. He was 26, and, as I said, he joined the Army Service Corps. He might have been assigned to the regiment because he was one of the very few people at that time who could drive. This was probably because of his apprenticeship to a grocer, but I don’t know. He signed up on November 17, 1914 and was sent to France on December 23. When his daughter asked him what he did, he simply said he delivered stores to the front line. As was quite common in those days, he gave no descriptions at all.  We do know that he was promoted to corporal and based at No 2 GHQ Reserve Motor Company in Calais.

The Army Service Corps wasn’t a glamorous regiment. It didn’t get its Royal prefix until after the war was over, and the men in it called themselves Ally Sloper’s Cavalry (after a cartoon drunk and rent dodger). There were only a few hundred motor vehicles worldwide in the regiment in 1914, but there were 105,000 at the time of the Armistice. What I found strange was that there were also 650 former civilian buses on the Western Front, used to transport troops and stores. It must have seemed like the blackest of humour to be sent up to the front line at say, Ypres or Arras or Paschaendale, on a Number 32. (I think my granddad drove one of these; he was certainly a bus driver for a time after the war.)

Historians have paid so little attention to this regiment and the part that its men played in the war, that it is extremely difficult to get any details about specific units and what they did. But it doesn’t take much imagination to realise how terrifying his job must have been. You can’t drive and shoot at the same time. You just have to keep driving. When James was demobbed on May 27, 1919, his discharge papers noted that he was a ‘very good driver, thoroughly reliable’.

The German artillery definitely liked to target the supply trucks and depots. And when casualties mounted among front line troops, the soldiers of the ASC were routinely given a gun and sent to the front. According to the Western Front Association  it is rare to find a British War Memorial without the name of a soldier in the ASC. Two members of the regiment were awarded the Victoria Cross. Some of the bravest men in the war, those who drove the field ambulances, were in the ASC. This year marks the centennial of the start of the First War, and yet, according to Army history site The Long, Long Trail, the regiment, so vital to the army, merits just four mentions in the Official History of the war.  There is no memorial to it.

As I said. Shameful.

I started blogging because I'm a writer, and I thought I ought to. Now I realise that I blog because I lwant to; even when I can't think of much to say. I do a lot of work for local businesses - get in touch if you like my style.
View all posts by elainecanham »
« Flash bang wallop, why did you go to New York, James?
Pull the other one »

15 thoughts on “How shameful is this?”