Florence and the zeppelin

Florence Parrott was the first person I ever interviewed as a junior reporter. I was 18, the same age as she was when she joined the Royal Flying Corps in 1918.

I had been a reporter for about two weeks when I was sent to talk to Florence, who was then 79, and partially deaf (you’ll have to speak up, DEAR!). She was tall, rangy, ready to laugh, with great booming ho, ho ho’s, and she told her story with a sort of matter of fact understatement that I, as a teenager, just nodded at and wrote down, and now as a mother and grandmother, think of with rather greater imagination.

In 1917, the teenage Florence Maple was a wine waitress at London’s Liverpool Street Hotel, and part of her job was to go next door to the railway station to give lunch boxes to troops departing for the front.

She said: ‘The train and platform were packed with people that day. We heard a whistle and thought it was the train moving off. But we looked up and there was a zeppelin, dropping bombs. I don’t think there was much of the train left.’

In the midst of all this carnage, Florence, who was hit in the arm, shook her fist at the zeppelin, swore at the Kaiser and then was taken to St Barts Hospital. When she was discharged, she went straight to the Connaught Club and joined up. ‘I said to them, if I’m going to get knocked about, I’ll damn well go where I expect it.’

She was one of the first women allowed to join the women’s section of the Royal Flying Corps, which became the Women’s Royal Airforce in April 1918. She went to France with the first boatload of such women and was stationed in Cressy, near Vron in northern France. It was her job to pick up stores from Etaples (‘Funny names the French have. We pronounced it Eat Apples’) which had become a vast military camp and giant hospital and then deliver them to local depots. According to FirstWorldWar.com the hospitals were targeted several times by incendiary bombers, and many of the orderlies present risked their lives getting the wounded men to safety. Florence just said: ‘We had to run for our lives a couple of times, dear, and I’ve known days when there was nothing to eat but a piece of hardtack. Of course, you couldn’t drink the water.

‘I remember the morning that the news of peace came through –we got every vehicle that had a wheel, including wheelbarrows, and we put the men who couldn’t walk in those and we went round and round the green patch in the middle of the camp. The PoWs came and the people from the village. We just couldn’t stop laughing and singing.’

Florence eventually made it back to England, with the last boatload of women who had served in the corps, in 1919. She married and settled down in Buckinghamshire, where she spent the rest of her life. To my shame I have no idea when she died, and I regret that I never asked her the questions that I’d like to ask her today; about how she felt and how her experiences affected her. Although I doubt, even if I could ask her, that she’d want to answer those kind of questions. All I have is a faded cutting and an enduring memory of one of the strongest women I ever met. 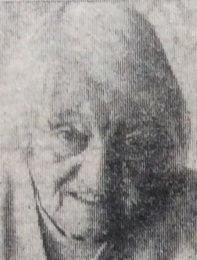 I started blogging because I'm a writer, and I thought I ought to. Now I realise that I blog because I lwant to; even when I can't think of much to say. I do a lot of work for local businesses - get in touch if you like my style.
View all posts by elainecanham »
« Final score
Soft paw corn »

19 thoughts on “Florence and the zeppelin”