My mother, the hijacker 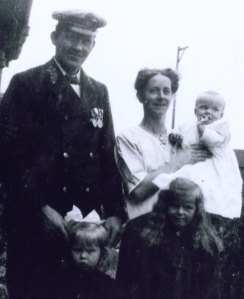 William and my grandma, Helen, holding my mum

I was going to write here about my mum hijacking a bus, but my granddad started edging in to the story, so I’ll start with him. Be patient.

My grandad (not the one in my previous posts who fell off the Mauretania in New York) started with nothing. He was the son of a ploughman in Perthshire and when he was 20 he signed up as a stoker with the Royal Navy. This meant, literally, that he spent most of his time in the bowels of one destroyer or another shovelling coal, while up top sailors fought off Chinese pirates or German E boats, or whoever else was trifling with the British Empire. He was a cheerful, alert, competent man and good with machines, so he got trained as an engineer, and by the time he retired 20 years later, he had come through the First World War in one piece, had been Mentioned in Despatches, was a Chief Petty Officer with a row of medals, and still cheerful.

He left the Navy in 1920, and took his wife and baby daughters to a small village in Perthshire where his brother thought there might be labouring work at the local Big House. The family, like most others in the village, grew all their own vegetables, but it was William who thought of putting the best ones in his wheelbarrow and then taking them round to sell to all the local hotels. With his pension, he bought a truck to sell his veg in Perth, and then –stroke of genius here – he put benches down either side of the truck and gave people lifts into the town for a penny a go.

One of William’s first buses

This was a sensation in the village. Up until now, if you had wanted to get to Perth, you had to get in on a horse and cart. Still, there were doubters. One old lady made ‘Wully’ stop at the bridge just outside the village. She had no faith whatsoever in the truck making it across in one piece. ‘I’ll just go across on ma own two legs, and you can get me oan the other side.’

‘Wully’ was such a nice bloke, that if you didn’t want to go into town, you just gave him your shopping list, and when he parked up, he would go off and patiently queue for whatever you had asked for. This occasionally backfired, for instance when he misheard one woman’s request for ‘pan shine’ and bought her ‘sand shoon’ (trainers) ‘I had to guess your size, missus,’ he was heard to say. ‘I hope they’re big enough.’

Business thrived. By 1936 Wullie had a fleet of buses, my auntie Helen was the first woman bus driver in Scotland, and my mother, aged 16, was an accounts clerk. But she was itching to have a go behind the wheel. One evening when she left the office in Blairgowrie where she worked, she queued up as usual to get on one of her dad’s buses to go home. The bus had been parked up for an hour or so, and when she saw the driver coming out of the pub she realised that now was her chance.

She smiled at him. ‘Did you enjoy your pint, Charlie?’

Charlie was obviously rather bemused by this.

Mum went straight in with the killer blow. ‘Good, because I want to drive the bus home.’

The bus was packed, but Charlie, fazed by my mother’s implied blackmail, meekly gave her the keys. My teenage mother then, having taken no test (not that they did in those days) and with no driving licence, sat down, started up and drove home.

It’s fair to say I was rather shocked when mum told me this story. ‘But, but, but…’ I kept bleating.

‘Ach, away,’ was her reply. ‘Charlie knew I could drive. In those days there were none of these silly rules and regulations telling you what you could and couldn’t do.’  She paused for a bit and then said, ‘And, anyway, nobody on the bus minded at all.’

‘How did you know nobody minded?’ I demanded.

Mum looked astonished. ‘Because I was Wully Armstrong’s daughter. So, they knew they were fine. Everybody trusted my dad.’

I started blogging because I'm a writer, and I thought I ought to. Now I realise that I blog because I lwant to; even when I can't think of much to say. I do a lot of work for local businesses - get in touch if you like my style.
View all posts by elainecanham »
« Soft paw corn
More weird headlines »

18 thoughts on “My mother, the hijacker”