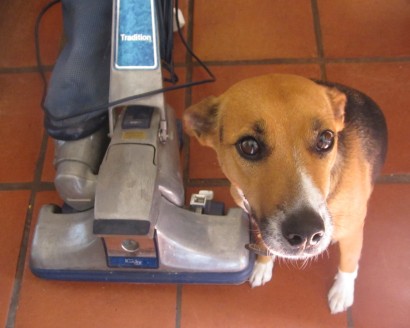 Steve came home from the car boot with a vacuum cleaner. An enormous blue and chrome 50s monster that needs 2,000 Egyptian slaves to push it round the living room and when it’s switched on is so loud you can’t hear the dogs bark.

He was fantastically pleased with it. ‘Look at this,’ he said, as he wrestled it out of the boot. ‘Isn’t it great?’

‘But we’ve got a vacuum cleaner,’ I said. ‘In fact, we’ve got three, if we count the last two broken ones you got from the car boot. What are we going to do with this one?’

‘That’s just the point,’ he said proudly. ‘It can do anything.’

‘It’s an extraordinary machine. American, you know. They use it to power all sorts of stuff. You can spray paint with it.’

‘You can get all these amazing parts for it. There’s even a sort of stick attachment thingy that drills holes.’

I should have been firm. I should have said, ‘You already have five drills. And two paint guns, come to that.’

But he looked so pleased and eager that, against my better judgment, I gave in. I let the monster into our house. Of course it was far too heavy to carry up the stairs, unless you had a team of Sherpas handy, so I used it in the living room. It was very quickly apparent that it was completely useless. I found myself getting to the point where I would pick up any stray bits of stuff and put them directly in front of it. It was like showing a dog a biscuit. But after pushing the machine over the stuff and then heaving it away, stuff was still always there. If at any point you let go of the monster, the handle would fall on your foot. Cleaning sessions (not that there were many) would generally end with me kicking it, and spending the rest of the day with a faint ringing in my ears.

The cleaner went, very quickly, to its new home in the Outhouse of Doom. And as the years went by it was covered in other remnants of useless tat, as is the way of fossils and ridiculous machines.

That is, until last week when husband couldn’t fit anything more in the outhouse, and it was time To Get Rid Of Stuff.

‘It’s such a good thing,’ he said sadly. ‘Really well made.’ He looked at me hopefully. ‘It’s very versatile, you know. It can spray paint.’

This time, I stood firm.

Disclaimer: My husband would like it to be made clear that he didn’t actually want to spray paint with the vacuum cleaner, he just thought its ability to do this was the mark of a well made machine. He also claims the loss of suction was due to me hoovering up a sock (see previous post on socks), but that, yes, it does weigh the same as a small car.

I started blogging because I'm a writer, and I thought I ought to. Now I realise that I blog because I lwant to; even when I can't think of much to say. I do a lot of work for local businesses - get in touch if you like my style.
View all posts by elainecanham »
« Driving with my baby
Off-road writing »

19 thoughts on “Vacuum cleaners? They suck”