Nervous? Why should I feel nervous? 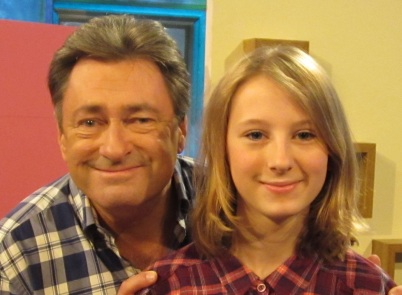 I’m all of a doo dah. And I don’t know why; it’s got nothing to do with me, really. My daughter Rose is going to a big swanky do tonight, because she’s been nominated by Company Magazine as Britain’s best teen fashion blogger. (Drinks all round, ed).

Trouble is, she has absolutely insisted on going on her own and the do is in London’s East End. (It’s mostly gentrified now, but still very dodgy in places. Especially if you are a lone teenage girl.)

No. She wanted to be the cat that walks by herself. Ever tried arguing with a 17-year-old girl? Well, then, you see my point.

While I’m not that fussed about her going to London for a spot of shopping, during the day, or to stay with her big brother, I did start hyperventilating at the thought of her catching the last train home from Euston (or worse, missing it) in a sequinned mini dress and platform shoes.

Eventually, we came to a compromise. I would accompany her to the do and then disappear, amuse myself for three or four hours, and then reappear at the venue to take her home, and fight off any muggers/pickpockets/sex maniac psychopaths with one flick of my capacious handbag.

So, natch, I’ve asked a mate to come along as well, because it’s not often she and I get a night out in London. We’ll go for a good meal, drink, and then pick up (hopefully trophy-bearing daughter) well on time for the vomit express home.

Daughter is now hoping I’m not going to turn up and be embarrassing. (This term covers everything from how I talk to people, whether I hum, sing or whistle, tell a joke, or fart unexpectedly).

Little does she know that I am planning to scale a drainpipe, climb through a window and crouch at the back of the room, so that I can see her (hopefully) pick up the award.

But you won’t tell, will you?

The picture is of Rose appearing on the Alan Titchmarsh show two years ago after being named B&Q’s Young DIY enthusiast of the year.

I started blogging because I'm a writer, and I thought I ought to. Now I realise that I blog because I like to; even when I can't think of much to say.
View all posts by elainecanham »
« Death star canteen
And relax….. »

23 thoughts on “Nervous? Why should I feel nervous?”