All the happiness in the world

We went to a wedding on Saturday, in France. It was funny and joyful but poignant too. Rebecca, the bride, is the daughter of our oldest friends, and three years ago Becca’s brother Josh was killed in a motorbike accident.

I never thought I would see Trudi and Robin, their parents, ever look properly happy again. But, on Saturday, Robin came beaming down the aisle with his arm through Becca’s, while family friends and flautists Atarah Ben Tovim and Julien Grossias played Here Comes The Sun. Almost as amazing was the fact that Robin, whose idea of formal wear is wearing a T shirt with his shorts, was sporting a jacket, shirt and trousers.

The wedding was held at the Salle de Mariage in La Force, in the Dordogne. The adjoint, who conducted the service, wore a sash of red white and blue, and on the table in front of him was a vase of flowers and the bust of Marianne, spirit of France. He held his papers and cleared his throat as Becca and the bridegroom, Sylvain, took their seats in front of him, but at that point someone in the congregation shouted out, ‘You can’t start, Julien and Caroline aren’t here!’

The adjoint opened his mouth, but it was too late, Becca and Sylvain had already turned round, looked at their assembled friends and relations and then got up and approached each of us in turn, kissing us and shaking hands. By the time this was done (and believe me, everybody was kissed and shaken) Julien and Caroline, and their children, had arrived, plus a few more latecomers, and after they too had been welcomed and shown to their seats, the couple turned back to the adjoint who, having neither been kissed nor hugged, was now standing by a window staring resignedly at the rather stunning view of mediaeval rooftops.

Called back into service, the adjoint grasped his papers once more, cleared his throat again and then proceeded to read out the the French Civil Code, Articles 212, (Spouses owe each other respect, fidelity, support and assistance) 213 (Spouses are responsible together for the material and moral guidance of the family. They shall provide for the education of the children and shall prepare their future), plus articles 214, 315 and 371-1 (we get the picture, ed). After this, he read out the names and occupations of the couple and their witnesses, asked the pair if they wanted to marry each other, and when they both answered, ‘yes’, declared them man and wife.

And that was it. Job done. Nothing about just impediments, or forsaking all others, or any of the other questions that you get in Britain. Apparently, according to one fellow guest I spoke to later, in big cities they can turn round a wedding in 10 minutes flat; so fast, in fact, that no guests, other than the witnesses, are allowed to attend because it would take them too long to get in and out. In these cases, the reception takes place several days after the wedding.

But this was not a big city; this was the French countryside and, at every point, formality is subverted. As everybody posed outside for photographs, (more kissing and hugging) the adjoint took off his sash, and with the help of one of the witnesses, began to sweep up the confetti.

There was only one more thing to do. And this was where Josh came in. Becca had insisted on using his old BMW to get to the reception. ‘If he can’t be there,’ she said. ‘At least his car can.’ Robin had spent hours restoring it to gleaming perfection. The only thing left to do was for them to get in it and lead a convoy of hooting cars to a very happy party. 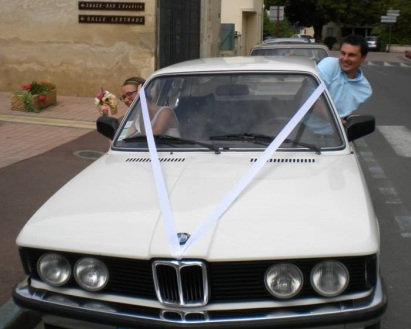 I started blogging because I'm a writer, and I thought I ought to. Now I realise that I blog because I lwant to; even when I can't think of much to say. I do a lot of work for local businesses - get in touch if you like my style.
View all posts by elainecanham »
« And relax…..
The wrong man »

23 thoughts on “All the happiness in the world”