On Sunday we went to the Hollowell Steam Rally. Hollowell is a beautiful village in Northamptonshire, and every year steam enthusiasts – that is grimy cheerful men who like driving steam engines very slowly – converge on some fields near the church and show off their darlings to all and sundry. In fact they travel so slowly, that they probably get home from the previous year’s show, just in time to turn round and come back.

We’ve gone every year since the kids were small, because what else do you do on a July afternoon in England but eat hot doughnuts, admire the heavy horses, have a ride on a steam driven bus and enjoy a pint of Sam Smiths/Greene King/Marstons Pedigree in the heaving beer tent? (You could have cider, if you wanted, but really, why would you?). It was one of the high points of the year, and there were times when the kids insisted on going on Saturday and Sunday. There were even plans to camp over. 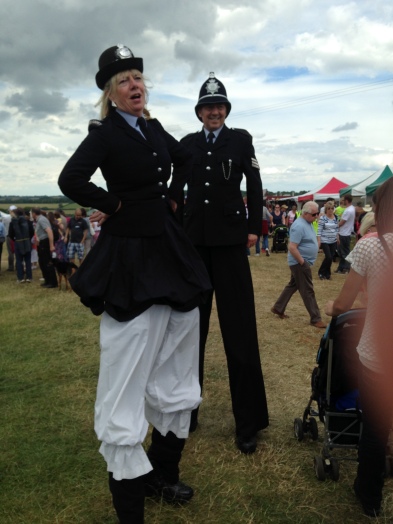 But time has passed, and our kids, as kids do, have been getting older and steam engines no longer cut the mustard. This year only our youngest, (and he’s nearly 15) came with us. He wasn’t going to. His verdict on the whole prospect was ‘But it’s so boring’. Then we mentioned the doughnuts, and he got in the car.

And it was lovely. There were the usual bizarre overheard snippets of conversation, ‘He said, you can’t come in here; you’re not wearing white trousers.’ ‘He’s so like his father, such an arrogant looking head. Mind you, he’s a lovely boy.’ And, ‘I came round to borrow your wobbelator but you weren’t in.’

Husband had to be physically dragged away from the stationary engines, the parade ring was a stately mass of motorbikes, Victorian prams and dogs and heavy horses. The doughnuts were fab. Husband and son moved among the motorbikes like judges at a cattle show. ‘Look dad, a BSA Bantam; mm that’s a beauty, look at the stainless steel exhausts on that one; Norton, fabulous frame.’

As we were leaving a Spitfire and a Hurricane flew over, and everyone stopped to follow them across the blue, cloud spattered sky. It was, as Lou Reed would say, a perfect day. And next year? Of course we’ll be back. But our kids may have better things to do.

I started blogging because I'm a writer, and I thought I ought to. Now I realise that I blog because I lwant to; even when I can't think of much to say. I do a lot of work for local businesses - get in touch if you like my style.
View all posts by elainecanham »
« Dead wrong
How To Know If You Are A Chick-Lit Heroine »