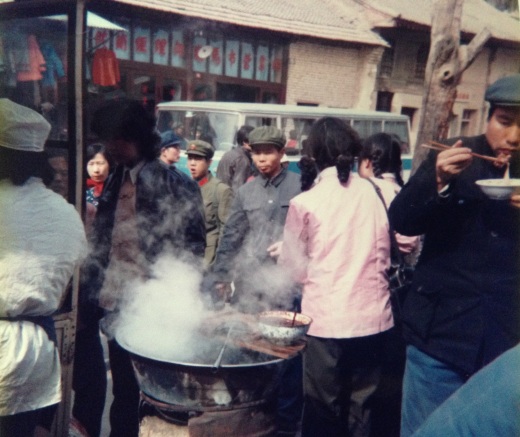 Continuing my 1985 diary of my trip to China.  Here, we discuss vacuum cleaners and I discover dumplings.

Our room is lovely. A six-bed dormitory and so far, we are the only ones in it. The beds are tubular metal ones, like you get in hospital, with hard mattresses, but comfy quilts and…a bathroom. Holy of holies. A bath with hot water, all the time, and a real sit down American bog. Joy.

We spend most of the rest of the day wallowing and sleeping. Elspeth has decided that Bill the sexy Hungarian she introduced me to in Beijing is definitely an aristocrat and that she is going to marry him. ‘And we’ll invite everybody to the castle for Christmas…’ she paused. ‘Do they have castles in Hungary?’

Cheryl and I looked at her and shrugged.

‘Bound to,’ said Cheryl. ‘What else do aristos live in?’

‘They’re hot on horses,’ I said. ‘There’s lots of sweeping plains and they spend a lot of time riding about in leather trousers and eating salami.’

‘And they eat lots of cherries,’ I add.

‘No, the proud Hungarian aristocrats. Cherries. Practically their staple diet. And beetroot. Although that might be the Russians.’

‘I couldn’t do Hungarian,’ said Elspeth, ignoring the fact that she didn’t have too many problems with getting by in Chinese. ‘What’s the German for “Where is your castle?”’

I thought for a bit. ‘Dunno. But I know how to say, Where is the vacuum cleaner? Wo is die staub sauger?’

Elspeth lay back on her bed. ‘That’s not going to be much use, though, is it? I mean, I can hardly go up to him and ask him where his vacuum cleaner is. He’d think I was mad.’

‘Especially as he speaks perfect English,’ I pointed out.

‘I want to impress his family,’ said Elspeth. ‘His mum and dad, and all the little barons. I don’t want them to think I’ve come to do a bit of cleaning.’

‘It’d be more to the point,’ said Cheryl. ‘If you learnt how to say, Wie viele staubsaugern haben sie? How many vacuum cleaners have you got, and then you’d get more of an idea of how big his castle was. I mean, if he said 50, you’d probably be onto a good thing.’

‘If he has 50, he’s probably a vacuum cleaner salesman,’ said Elspeth, gloomily.

‘A sexy one, though,’ said Cheryl.

In the evening we go for a wander. Cheryl and Elspeth are amazed that everyone is still up after 7pm. In Beijing, apprently, everything stops then but, here, kerosene lamps flare on every corner, illuminating people on small stools gathered round tables shovelling in dumplings like there is no tomorrow; or stalls piled high with fireworks (we bought three), or noodles, or clothes or sweets.

Next morning we have breakfast in the restaurant at the People’s Edifice. Honest to god it is so enormous, you’d need an oxygen mask to paint the ceiling. It’s like eating in a gym. But they do boiled eggs and toast. Also on the menu is dog meat in brown sauce. None of us fancies that. 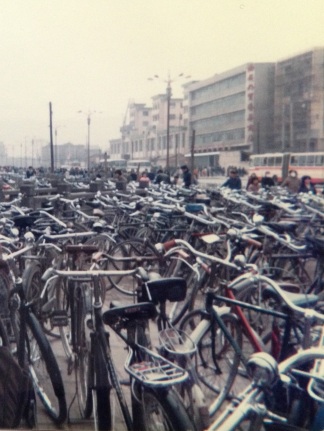 Go to the public security office to get my pass for Lhasa. The official is beautifully polite. He also has beautiful handwriting and he doesn’t seem to have heard of red tape. Here is the pass, here is my name, in Chinese, and here was his official stamp. Sit down, here you are, thank you, thank you. It is as simple as that.

Went looking for somewhere to eat. Forget warm steamy caffs with ham egg and chips and a mug of tea. Cheap restaurants here are bare and draughty. It’s a bit like sitting in a garage. Bare tables, bare walls, and full of people shouting. All the cooks dress in white, with white mob caps; they are like subjects in a Breughel painting, busily kneading dumplings in an adjacent garage. 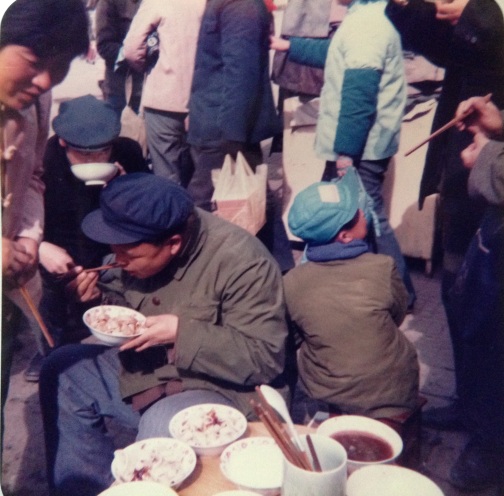 You have to bring your own chopsticks. You can use the restaurant’s chopsticks; they are generally in a box by the till, but they’re not really washed. You have to queue up and say what you want, and hopefully they decide you can have it. Sometimes they tell you, MayoLa, which means, ‘No, we haven’t got it, and even if we did have it, we’re not going to give it to you, and we really can’t be bothered to talk to you any more, so go away now.’ Amazing how much meaning those three syllables have. Anyway. If you don’t get the mayo treatment, you get a ticket, and then you have to trek over to the other side of the restaurant and queue up again to get your food. And again, you might get a ‘mayo’. I’ve not been here long, so I’m more bemused than anything, but Cheryl and Elspeth have been here for five months and the continual little obstacles that you seem to get in every day life here are wearing them down.

Xian is practically the only area in China that is not noted for its cooking. The only thing you can get to eat when you’re out and about is noodles or steamed dumplings. I don’t care for the noodles which tend to be great thick ribbons of pasta, which completely clog your mouth up and taste of nothing much. But the dumplings, the little ones which are jaozi, or the big ones, baozi, are filled with meat and veg and are lovely. You pick one up with your chopsticks, which is difficult because they are a bit slimy, dip it in a mixture of soy sauce and vinegar and then shove it quickly in your mouth before it falls in your lap. The tables are none too clean, and the floor is filthy, so if you drop something, that’s it. Its so cold that if you drop any gravy it congeals before it has a chance to run off the table. I can’t work out at first why people are eating so quickly, and then I realise its because they’re hungry. They’re not eating because it’s a sociable thing to do; they’re eating because they need to refuel. But, those dumplings are good. I’m soon shovelling away with the best of them.

I started blogging because I'm a writer, and I thought I ought to. Now I realise that I blog because I lwant to; even when I can't think of much to say. I do a lot of work for local businesses - get in touch if you like my style.
View all posts by elainecanham »
« China 7: Chrysanthemum Wang
China 9: Pagodas and plans for Tibet »