China 34, A lesson in gold smuggling 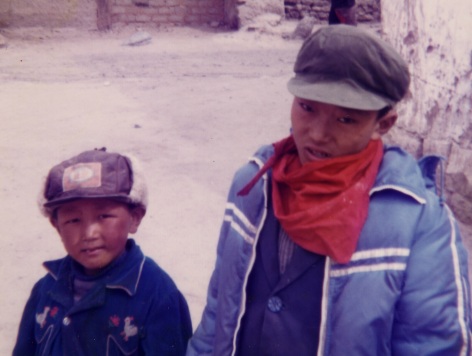 Don’t think I’ll be going anywhere today. We were planning to borrow bicycles and go the Drepong monastery, but after last night, I can’t even summon up enough energy to go with the others to the Dalai Lama’s summer palace, which is much nearer and has a western bog and a Philips radiogram, according to Michael, the gold smuggler.

Michael is a terribly serious, young(ish) bloke who comes from Cricklewood, and who is attempting to learn how to do the Daily Telegraph cryptic crossword. He used to work in a dole office, apparently, advising claimants on how to fill in their UB40s, and now he runs a smuggling ring from Korea to India. Amazing the turns a career can take.

I don’t know why he wants to learn how to do cryptic crosswords. It’s not as if he needs something to do on the 8.10 to Liverpool Street every morning. And commuters only do the crossword so that they don’t have to speak to any of their fellow human beings. I keep thinking of that scene in James Bond where 007 says, ‘Do you expect me to talk?’

In my mind, Goldfinger is replying, ‘No Mr Bond, I expect you to help me with 24 Across.’

Still, Michael is earnestly insistent that I unlock the mysteries for him, and in between wondering if I’m going to heave again, I do my best. He has a much-thumbed paperback of crosswords, and we go through them slowly.

‘It’s like a secret code,’ he says. ‘And nobody ever tells you how to crack it.’

Julie works for him, as a mule. She’s an ex teacher but she got bored with her husband who was an accountant and who wore shirts with contrasting collars. She had a hatchback and an executive house with fully fitted carpets and she and her husband went to fondue parties and drank Mateus rose, and one day she bought a backpack and went to India. When her savings ran out she did a few little trips for Michael and apparently it’s very lucrative. He pays $600 per trip.

I thought about doing it too, for about 30 seconds. The money is very good. But I’m not too keen on inserting two lumps of gold the size of large torch batteries, into my bum. You get on the plane to India and when you get off you are met by a taxi driver who takes you to a pre-arranged meet, where you produce the gold and get the dosh. But it doesn’t always work out like that.

‘Sometimes the taxi drivers have been bribed by a rival gang to take you to the police station instead,’ Julie told me. ‘That’s what happened to me. And I just kept telling the police I had no idea what was happening, and that I was just an innocent tourist, and they said they would let nature take its course. So I just hung about in the station doing my yoga exercises to show that I hadn’t a care in the world, even though, ohhh, that gold was really hurting. But then some more money must have changed hands because they let me go. And everything was fine.’

Everything, except, possibly, her backside, where she could now keep her rucksack.

I started blogging because I'm a writer, and I thought I ought to. Now I realise that I blog because I lwant to; even when I can't think of much to say. I do a lot of work for local businesses - get in touch if you like my style.
View all posts by elainecanham »
« China 33, The invisible monk
China 35: Strangers in the night »