>>
you're reading...
My words (a random display of my own creative writing)

The snow leopard and the journalist 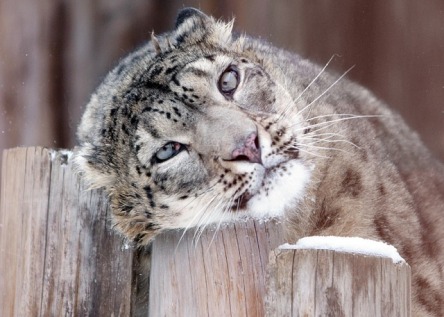 Now listen. Once upon a time there was a snow leopard and he lived far away in the majestic beauty of the Himalayas with all their snowy peaks and rushing waters. He was a solitary soul. He ate by himself, slept by himself and walked by himself. He wasn’t what you’d call a party animal.

But, oh was he beautiful and mysterious. His coat was as thick as a shag pile rug and as soft as a cardigan. And his tail was like a plumy rope. And he padded through the secret places of his kingdom without a care.

Everybody wanted to know him. ‘What does he do?’ They asked. ‘We want to know all about him.’ Photographers camped in leaky hide-outs for months to get a single, clear shot, and TV documentary makers roamed the snowy peaks and whispered in awe about his beauty and strength. But they only caught useless glimpses of him, and they never saw him do anything.

And all the expensive executives in all the newspapers and TV channels wailed and rended their Vivienne Westwood tweed suits in despair. Because, after all, prime time footage of a snow leopard doing something would boost the ratings, like, well, significantly.

And there was at this time, a desperate struggling journalist, who thought to himself, ‘How hard can it be to get an interview with a snow leopard? Does he have a publicist? Or an agent? Or a security code on his front door? No. He does not even have a front door. I’ll show those documentary makers.’

And so the cunning man dressed up in a snow leopard suit and set off with his notebook and his pen and a teeny tiny tape recorder. And he travelled many, many miles and at last came to a still pool in the foothills of the Himalayas where the snow leopard was looking at his reflection, and twitching his plumy tail.

And the journalist sat down beside him and asked the snow leopard all sorts of questions about his favourite music and what he liked to eat for breakfast, and other such questions that showbiz reporters use to mock the majesty of kings.

‘Thanks,’ squeaked the journalist. Because, really, that paw was heavy.

‘And the plumiest tail. Plumier, even, than mine.’

‘I’ve been a bit lonely, lately,’ said the snow leopard. ‘Marry me, and let us shimmer through the undergrowth together. I will show you how to tease a TV crew, and demoralise a documentary maker. And we will have such fun.’

‘Um,’ said the journalist. And he took off his fake, snow leopard head. ‘I have something to tell you.’

And the snow leopard looked at the journalist’s sweaty face (it had been very hot in the suit) and at his notebook and his biro and his teeny tiny tape recorder, and then he ate him.

Because that’s what snow leopards do.

I started blogging because I'm a writer, and I thought I ought to. Now I realise that I blog because I like to; even when I can't think of much to say.
View all posts by elainecanham »
« Job interview? Just sing it and wing it
China 39: Escape plans »

18 thoughts on “The snow leopard and the journalist”