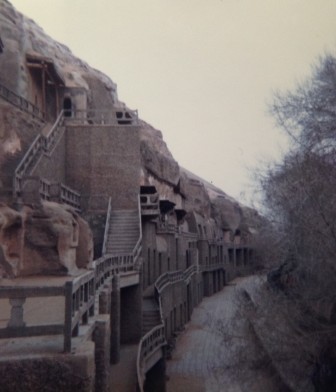 Continuing my 1985 diary of a trip to China

Check into Dunhuang’s hotel which, unlike the hostel, does have running water.  And it is hot. Showers all round! The shower is galvanized steel, like an upended spout on a watering can, and the cubicle is bare concrete. But at the risk of repeating myself, there is water and it is hot. How marvellous it is to turn a tap on and see water coming out.

At lunchtime they put 21 plates of mysterious stuff on the table and although we do our best, it is beyond us. When we finish, bloated, it looks like we haven’t eaten anything.

Share a minibus with three Japanese people to the Mogao caves. It’s the same driver as yesterday with the big shades. The caves contain countless shrines to Buddha, carved into a sandstone cliff between the 5th and 14th centuries when Dunhuang was a big stop on the Silk Road.

When we get to the caves we buy tickets – you can’t go anywhere, or do anything, in China without buying a ticket. But when we drive from the gatehouse to the entrance, the gates are padlocked. A man standing there says, ‘The caves are closed until May.’

One of the Japanese guys, a poetry professor, and his wife, wade into battle. ‘But the hotel sent us here! We’ve bought tickets! What do you mean, closed? Two of our friends came this morning.’

‘Impossible,’ replies the gatekeeper, and then adds, really rashly for a Chinese person, ‘The man with the keys was here, but he has gone home.’

The bus driver, polishing his beloved minibus, comes up to join us. ‘How do you know he was ill?’

A crowd of Chinese people, also waiting by the gates, decide this is their cue. They too advance on the gatekeeper, much to his alarm.

Eventually the gatekeeper, deciding that he is heavily outnumbered, comes up with a handy solution. ‘I’ll go and get him,’ he says, and scuttles off.

The key-keeper, when he arrives about half an hour later, really doesn’t look the picture of health, and Cheryl, Elspeth and I all feel a bit guilty. The Japanese have no such qualms. Off they stride, through the now open gates, with us behind and the Chinese bringing up the rear.

The caves are well worth the argy bargy. From the outside they look like run-down slum flats, because the sandstone has been shored up with concrete beams and pebble dashed to stop it crumbling. It was done during the Cultural Revolution so, in the circumstances, they were lucky to have got off so lightly.

It’s dark inside, with fitful light provided by dim electric bulbs strung haphazardly here and there. But the poetry professor has a torch like a collapsed sun, and we have little wavering torches that we poke bravely in some of the darker corners. The gate-keeper comes along with us, giving us random facts that Cheryl and Elspeth translate.

Some of the caves have faded and crumbled, but others are spectacular. In one, the walls are covered with 1,000 images of Buddha, done in repeat patterns of red, blue, green and ochre. The ceilings are painted with flowers and not a square inch is left bare. There are huge statues of Buddha, surrounded by disciples, some with the most evil looking expressions on their faces.

Three statues in particular stand out. In one cave you enter, you are at eye-level with the lap of Buddha; going further in you stare up at the rest of him, 13 metres high. After stumbling around the echoing stairways and passageways, being spooked occasionally by the distorted, echoing voices of our fellow explorers, we come upon a larger and even more impressive Buddha. As we pool the light of our torches, we realise that we are on a balcony staring straight into his eyes, and then we look down on the rest of his 26m high bulk.

In another cave, a gigantic dead Buddha lies surrounded by murals of people all over the world in anguish at his passing.

In every cave there is a statue of Buddha. Mostly his expressions are serene, sometimes bland, and once, his eyes glittered with malice in the light of our torches.

Continuing my 1985 diary of a trip to China.

Just before dawn we get the bus to Dunhuang. It’s the hippy bus again, and we decide to sit at the back. The few villagers who are there, are all at the front. They turn and watch us expressionlessly as we slide on to the wooden seats.

‘This reminds me of being on the school bus,’ I say.

‘Yes,’ said Cheryl. ‘The back seats were the best. Isn’t this great?’

‘And now we’ve got them all to ourselves,’ said Elspeth. ‘Wonder why nobody else wants to sit here?’

‘Obvious, isn’t it?’ I say loftily. ‘Back seats are just another sign of western decadence.’  And we laugh. Ha ha.

The bus sets off. We see the sun rise over a slag heap. Actually we see it rise several times as fresh heaps alternately obscure it and then reveal it again. The road gets bumpier and bumpier. The bus seems to be made out of solid metal. There is no suspension. We realise this, though, when the driver really gets into his stride out of town and starts to aim for the potholes. Although to be fair, they are difficult to miss.

The first one he hit, I spring fairy-like upwards, and narrowly avoid smashing my head on the ceiling. I land, with all my bones rearranged, on the seat again. Cheryl and Elspeth, too, are gasping untidily, and then we hit the next pot hole. Bang! And up we fly again, squawking and swearing. The only thing to do is to grip tightly to the seat in front and crouch hopefully like tethered birds, grimly being shaken into half flight with every bounce.

The villagers have all swivelled round again and are watching us with keen interest. 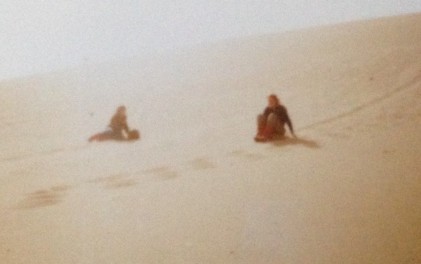 But it isn’t easy. We stagger crazily up the bus, under the gaze of the locals. This is obviously the best entertainment they’ve had for a very long time. And then, when we do make it, I realise we have left the gin behind. I crawl back to get it, and smack my face on the back of a seat.

Dunhuang is very sunny; it isn’t much better to look at than Liu Yuan, but there is a friendly air to it, and it is much busier. There are a lot of trucks, which is a good sign for our hitch-hiking plans. Some of them, surely, must be able to take us to Golmud, where we can get another truck to Tibet.

We check in at a hostel, which is pretty bare, and there is no water there either. Still, it is clean, and we go in search of food. Find the main hotel which is much nicer, and decide to check in there tomorrow. They offer us lunch and charge us a few Mao each (about 60p). For this we get a table covered with little saucers. Some have got readily recognisable food, like cabbage and mushroom or pork and spring greens. But there’s one of little cubes of meat in gravy that looks like Pedigree Chum, and another that looks like someone has just cut the seams off a lot of polythene bags and dipped them in vinegar.  They taste like that too. 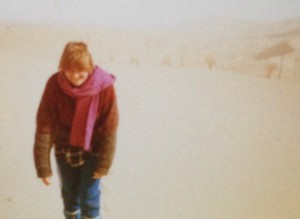 The hotel arranges a taxi ride for us to the Singing Sand Dunes. The taxi turns out to be a minibus, very plush, just for us three and driven by a very cool dude in shades. He spoils the image, though, by grinning manically at us. He’s a really nice bloke, and very proud of the dunes. And they are beautiful, huge and yellow against a clean blue sky.

We stagger about for a laugh, gasping ‘Water, water!’ but the effect is spoiled by the fact we are wearing four layers of clothing. The crescent lake is beautiful, but inches thick in ice. We walk all over it, getting sunburnt from the reflected glare. According to Cheryl’s guidebook some emperor in the Han dynasty about 200 BC used to come here for his holidays and the entire court would stay by the lake in silken pavilions. We try to climb the dunes, but can only get so far before the sand just runs out from under our feet and we roll back down. Good fun, though.