Mrs Olf and the three pigs 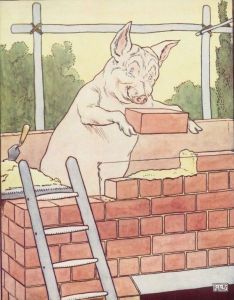 Once upon a time there were three little pigs. They went to see their bank manager. ‘We are a tripartite alliance of small independent bacon producers who are seeking empowerment as individual entrepreneurs,’ they told her. ‘We’d like to access suitable funding for materials relevant to ensuring our independent well being.’

‘What are you doing?’ iterated the former two parties of the first part.

‘I’m building a house, my porky little brothers,’ replied the latter, who had not participated in the regular vocabulary trainings facilitated by their HR department. ‘What does it look like?’

‘But there are no framework conditions for using this building material,’ exclaimed the first two. ‘There is no collective agreement for brick dwellings.’

‘I don’t do collective agreements,’ said their brother. ‘I’m a pig. And so are you.’

Notwithstanding this unexpected problem in the building area, at some point, Mrs W. Olf arrived and signalled her intention to reorganise the straw house and conduct a personal take-over of the occupier’s assets.

‘It’s Mrs Wolf!’ cried the first pig, running to his brother’s house. ‘Let me in!’

‘No, that’s Mrs W. Olf,’’ said the second little pig. ‘You’ll have to complete these forms, before I…’

But it was too late, Mrs Wolf had blown down the first house and was already coming up the garden path of the second.

The two pigs exited through a back window, as Mrs Wolf blew down the second house.

‘‘Why didn’t you realise the possibility of making your house stronger?’ said the first pig.

‘I didn’t know there was going to be such a significant outcome,’ panted the second, as they both ran to the third pig’s sturdy brick house.

‘Facilitate our entry!’ they shouted at their brother. ‘Mrs Wolf wants to reorganise us into a suitable breakfast repast!’

But the third pig held the door tight. ‘You can only come in if you talk normally,’ he said.

The two brothers looked at each other in horrified amazement. ‘You mean, give up all the phrases that facilitate our ability to communicate indefinitely without ever having to – ’

‘I’m coming to gitcha, pigs!’ snarled the wolf, who was now at the gate.

‘Let’s have an information event,’ said the second.

But just at that moment Mrs Wolf made one mighty bound and ate them both up. Just like that.

Which goes to show jargon will only take you so far, but a good wool suit is a killer outfit.