The Twinkies have landed 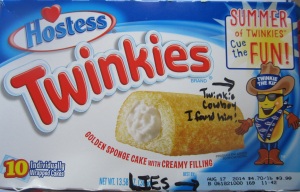 I am editing something at the moment that has a bibliography so long it stretches out like the explanation in Star Wars, to some galaxy far far away. I have to check every entry, and so far, on my way to Betelgeuse Minor, I’ve only got to Basingstoke. (Metaphorically speaking, because everybody knows that if you get to Basingstoke, you never get out again).

So naturally, I have turned to cake. Fellow blogger Naptime Thoughts was so astounded by the fact that I didn’t know what a Twinkie was, that she sent me a packet. In return I sent her Cadbury’s mini rolls and Jaffa cakes (which are what God has for his elevenses).

The Twinkies arrived yesterday, after a two-week journey, but there are no worries about them going off because, according to Naptime Thoughts et al, they are:

It was a hot day, and we were all in the yard lounging about, drinking tea and watching husband and son-in-law mending bicycles, when Julia the post lady arrived. The parcel caused the kind of excitement not seen, I suspect, since the people on Hawaii looked at Captain Cook, saw past his gaudy wrappings, and thought, hmm, dinner.

Everyone watched as I wrestled open the packet and extracted the brightly coloured box (containing 10 individually wrapped golden sponge cakes with a creamy filling). There was writing on the box next to the sell-by date, saying ‘LIES’ and an arrow pointing out the Twinkie cowboy (some kind of cultural icon?) and a note saying, love from America.

The reactions were roughly:

Julia the post lady – ‘What’s a Twinkie? Oh, cake. All the way from New Jersey? That’s a lot to pay for postage. Still, that’s America for you. You’ve got two bills and some junk mail. No. I can’t throw it away before I give it to you.’

Husband (swallowing one whole) – ‘Mmmph. Nice. Bit sweet. Can you put the kettle on?’

Daughter – ‘The inside is just like a Tunnocks Tea Cake. Do they have Tunnocks tea cakes in America? Shall I put the kettle on?’

Teenage son – ‘This is what they eat in that zombie film.’

Teenage son’s best mate – ‘They’re lovely. I love them… I’d love another one.’

So, thanks, America, (and Naptime Thoughts) and here are my conclusions on the cultural cake exchange:

And Captain Cook, this advice is probably a bit late, but you’d have been way better off not landing on the beach looking like the Twinkie cowboy.

Picture of Captain Cook via Creative Commons, courtesy of

I’ve had a lot of trouble with language lately. I told my exercise teacher (well, Sue in the village) that I’d just eaten a jeely piece and she had no idea what I was on about. (She’s Welsh, I’m Scots, and a jp is a jam sandwich).

Fellow blogger Barry wrote a post containing the word schnook. Apparently it means ‘nerd’, and is not the same as ‘schmuck’ which I had no idea (honest, guv) meant penis.

Another fellow blogger, Naptime Thoughts, (from New Jersey) thought I was having her on when I said I thought a Twinkie was a chocolate bar (that’s twinkie, not winkie). And whaddya know, it’s a cake. More on that later, as we are now set to engage in a programme of exchanging fondant fancies in order to further our cultural bonds. Amazing what posting on WordPress can lead to.

And, with the opening of the Commonwealth Games in Glasgow today, can I just help out any passing visitors with this vital information: ‘whaur’s the cludgie‘ means where’s the loo, and ‘yer bum’s oot the windie‘ means, you’re wrong.

So, in the meantime, while thinking of something really worthwhile to post about, and waiting for cake to fall from the sky, I post this film, which shows, that no matter how bad we humans are at misunderstanding each other, a computer in a lift can beat us every time.

picture from http://en.wikipedia.org/wiki/Chocolate_cake#mediaviewer/File:300x300_choc_rose_cake.jpg via Creative Commons.